Services: IP strategy, Obtaining a patent, Opposing and defending a patent at the EPO, Patent application drafting and filing, Patents 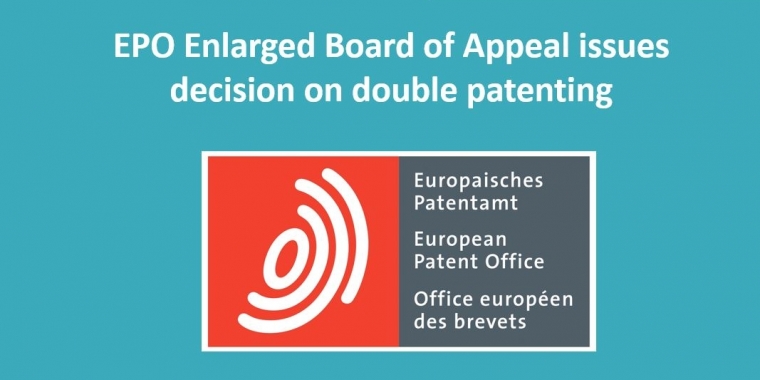 Confirmation of bar on double patenting

The principle of the prohibition on double patenting excludes two patents being granted to the same applicant for one invention and is applied in many countries. There had previously been some doubt about the existence of legal basis in the European Patent Convention for a refusal of a European patent application on the basis that the same applicant already has a granted European patent for the same subject matter.

This new decision by the Enlarged Board of Appeal now closes this question, confirming that an applicant cannot be granted two European patents for the same subject matter (“invention”).

The Enlarged Board of Appeal decision did not address the definition of “the same subject matter” as it decided that this was not part of the questions put to it to resolve and, in this case, the claims of the patent application and previous granted patent were identical in any event.  This decision therefore does not necessitate a reconsideration of the narrow definition adopted by some EPO Technical Boards of Appeal in recent decisions.

Some decisions by the EPO Technical Boards of Appeal that highlight the narrow definition of the “same subject matter” include the following two recent decisions.

This provides opportunities for applicants as an objection for double-patenting will not have grounds if there are similar or overlapping, but not identical, claims.

For example, one could take advantage of a positive finding by an examiner for a narrow sub-claim in order to safeguard the grant of at least a relatively narrow European patent for an invention, while filing a divisional application to challenge for a broader patent for the invention.

The patent attorneys at Page White and Farrer are experienced at identifying the best strategic approach for each patent and are happy to discuss how to deal with double-patenting questions.

This briefing is for general information purposes only and should not be used as a substitute for legal advice relating to your particular circumstances. We can discuss specific issues and facts on an individual basis. Please note that the law may have changed since the day this was first published in August 2021.