Home  >>  Information hub  >> Insurance briefing - When is a trade mark considered too similar?
Back to hubPrevious articleNext article

Insurance briefing - When is a trade mark considered too similar?

If you have spotted another trade mark within the insurance sector which is alarmingly similar to one of your own, what can you do to stop your competitor from using that mark? 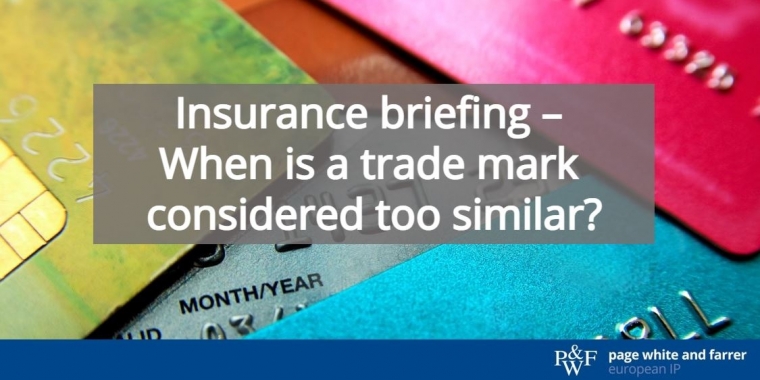 To object to another brand, you will first need to establish that the insurer’s services are similar to yours – see our previous Insurance briefing - is a competitor’s branding or services too close for comfort?

According to Chartered Trade Mark Attorney James Cornish, who has extensive experience in the insurance sector, ‘The next step will be to assess whether the brands are sufficiently similar based on legal principles.’

To have the best chance of success, it is important to understand what the Intellectual Property Office will be looking at when it considers your objection.

Intellectual Property Offices compare trade marks visually, orally, and conceptually, although visual similarities are often considered more important than aural ones, especially in industries where consumers buy online and by reference to the appearance of the brand rather than its sound.

The following dozen examples from within the insurance sector demonstrate the issues to be considered:

Conceptual differences can sometimes enable marks to be declared different.  Conceptual similarities between logos may not suffice for there to be a likelihood of confusion where those concepts are themselves non-distinctive in the industry, for example, scissors logos for hairdressers.

The image of a telephone is considered weak in the insurance sector because insurance is often bought over the phone. UK Insurance Limited opposed an orange red telephone with arms and legs of Gan Direct Insurance Ltd.  Both depicted a red telephone, but the clear visible differences meant there was no real likelihood of confusion arising. The similarities in the logos having phone connotations, in a sector where phones are not very unusual or distinctive, was less important in assessing similarity than the differences in visual appearance. B 2474784. The opponent lost.

Another case where the addition of descriptive words did not prevent the marks being seen as similar. Millennium Insurance Company Ltd opposed Banco Comercial Portugues MILLENNIUM and MILLENNIUM INSURANCE COMPANY LIMITED were also confusingly similar R696/2011-1. The opponent won.

Adding logos and descriptive words may not enable a competitor to claim that marks differ.

Groupama opposed Gan Direct Insurance Ltd. GAN (stylised) and GAN DIRECT INSURANCE & logo were compared.  The oral and visual similarities were sufficient for there to be a likelihood of confusion, despite added colours and logos, and the application was rejected. B1153214. The opponent won.

Weak words, like the word DIRECT, have limited importance when comparing other marks.

Seguro Directo Gere – Companhia De Seguros opposed Trade Direct Insurance Services Ltd’s application. SEGURO DIRECTO and 3 other words containing the weak word Directo were compared with TRADE DIRECT INSURANCE & logo.  The differences outweighed the similarities. The similarities in the element DIRECT had a low distinctiveness which meant there was no real likelihood of confusion arising. B1182841. The opponent lost.

Trade marks are assessed as a whole.  In short marks, small differences can suffice to prevent any real likelihood of confusion.

SWX Swiss Exchange opposed SME Insurance Services Ltd. SMI and SME INSURANCE were declared similar when the marks were compared as a whole. The difference at the end of the mark could be overlooked. B881989. The opponent won.

Weak words and weak logos may give narrow rights.

BE WISER INSURANCE SERVICES LIMITED objected to Group L Financial Investment’s application for WISE ADVICE and a logo, based on BE WISER as a word and BE WISER with an owl logo.  The logos were said to be visually different.  WISE was said to be of limited distinctiveness.  Less attention is paid to weak elements, such as WISE, so there was no likelihood of confusion arising.  B2783481. The opponent lost.

A high degree of care taken in certain industries can reduce the likelihood of confusion arising.  Generally, consumers in the fields of insurance, finance and real estate take more care.  However, there may still be a risk of confusion if the marks are similar.

Highly stylised marks that contain the same letters may be deemed similar.  There may still be aural similarity, for example, between acronyms in logos.

Other examples of similarity being declared in relation to insurance products and services include the following where the opponents won:

In some jurisdictions, words can be more distinctive than in others.

The importance of reputation

Reputation can increase the likelihood of confusion and of the success of an infringement, or opposition action.

Moreover, an insurer with a strong reputation that would be taken unfair advantage of, or suffer detriment, without due cause, may have grounds to object, even if the other’s services differ from their insurance services.

Evidence of reputation will be assessed in detail.  It will need to relate to the correct trade mark and the correct date period.  Objective evidence in the form of market share, turnover and invoices may be needed.

UK Insurance Limited opposed Gan Direct Insurance Ltd but failed to show the necessary reputation in their Red Telephone logo when they objected to the other company’s telephone logo in B2474784. The opponent lost.

Reputation on its own is not enough if the marks are not similar.

Each case depends on its facts and there will always be surprising decisions.  However, the above brief guide suggests there are some legal principles that can be interpreted from past cases that help insurers today decide if oppositions to competitors marks will succeed.

This briefing is for general information purposes only and should not be used as a substitute for legal advice relating to your particular circumstances. We can discuss specific issues and facts on an individual basis. Please note that the law may have changed since the day this was first published in May 2021.